Back To My AstroloJew ROOTS!

The Stars say it's time to go back to my Astrolojew ROOTS!

By the grace of G*d, B"H I'll be in Israel mid-December 2017 through the end of January 2018, and I'm already booking natal chart reading and couples chart reading appointments!

If you'd like to have your natal chart done in person during that time, please be in touch!
I'll be mostly in Jerusalem but will also be visiting Tzfat, Shiloh and Tekoa. Let's get together for some soul-star gazing!

Write to me at: lorelaikude@yahoo.com to make an appointment! 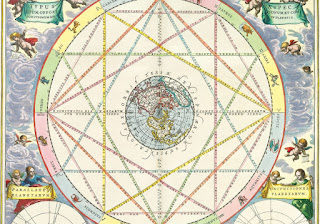 I was very flattered and humbled to be asked by the Jerusalem Post to write an article about the "Astrolojew" perspective on the 5778/2018 outlook in general, and for the State of Israel in particular.

In case you didn't get a chance to lay your hands on the print copy (which appeared in the Jerusalem Post's special Sukkot insert on October 4th), or you can't get through the paywall to read it, here's a link to download a PDF version of the article.

I'd love to hear what you think. Please send any feedback you might have about to: lorelaikude@yahoo.com
at October 15, 2017 No comments:

Neptune in Scorpio Generation: Jupiter's Coming For You!

If you were born between October 1956 and November 1970, you are part of the Neptune in Scorpio Generation. This is the astrological signature of the "sex, drugs, and rock 'n' roll" generation, those of us who sought transcendence and intensity via these substances/behaviors, as well as through meditation, esoteric practices, and alternative religious experiences. In other words: "The Sixties".

As Jupiter transits Scorpio over the next year and makes a conjunction to your natal Neptune, it's possible you'll experience enhanced sensitivity, elevated instinctual awareness, expanded compassion, and enlarged empathy. Depending on other aspects in your individual natal chart (which of the 12 Houses your Neptune in Scorpio is located, as well as other Planetary aspects), you may also experience extreme delusion and distortion of your perception of reality, enhanced vulnerability to substance abuse and addiction, and emotional boundary-shredding.

The potential for the sublime as well as the ridiculous, however in this case the ridiculous is potentially fatal. Neptune's natural proportion-distortion qualities are gigantically enlarged by Jupiter's transit, which super-sizes everything it touches. I'm issuing this warning to the Neptune in Scorpio generation to take heed of Jupiter's transit and remember that "Objects in the rear view mirror are closer than they appear" during this time.
at October 11, 2017 No comments: 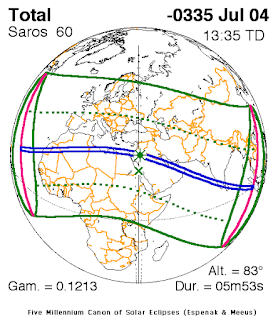 The Total Solar Eclipse of 4 July 336 BCE was part of the Soros 60 Cycle [i] which was fully visible directly over Jerusalem [ii], and coincided with the ascension of Alexander the Great to the Macedonian throne, after the death of his father Philip [iii]. 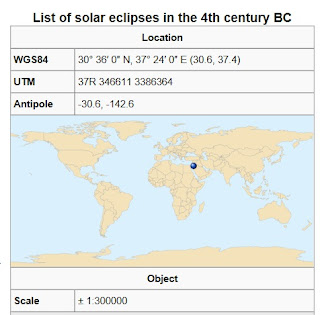 The Saros 60 Cycle ended in 260 CE, the year which is sited as the end of the First Generation of Amoraim (225—260 CE) [i], as well as the establishment of academy of Pumpeditha in Babylonia by Judah ben Ezekiel in 260 CE [ii], the capture of the Roman Emperor Valerian by the Persians (with whom the pro-Persian Jewish opposition was allied) in 260 CE [iii], among other events. Although it is impossible to speculate regarding exact dates in antiquity, the Fall of Troy is dated at 1020 BCE, while religious historians put the beginning of the reign of King Saul, the first anointed King of Israel, in 1026 BCE [iv], shortly after the beginning of the start of the Soros 60 Cycle. This “bookending” of world events marked at the beginning by the fall of Troy to the Greeks and the beginning of the Israelite Monarchy, and ending with the firm establishment of the rabbinic enterprise in Babylon (which would eventually produce the Talmud itself) and the diminution of the tattered remnants of Jewish political activism which found itself backing Persia against Rome, continues to have a ripple effect on Jewish history due to the sensitive position of the North Lunar Node during the exceedingly powerful eclipse of July 336 BCE. 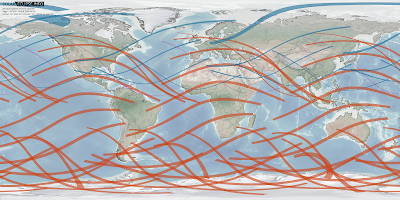 The Lunar Nodes in Jewish Astrology


Jewish Astrological tradition gives enhanced emphasis and attention to the Lunar Nodes and the annual eclipses in natal charts for both individuals and nations. The North and South Nodes of the Moon are not planets, but theoretical mathematical points in space marking the intersection between the Sun’s orbital path around the Earth’s ecliptic, and the Moon’s orbital path around the Earth. The function of the Lunar nodes in astronomy is to predict the path of the annual eclipses through the constellations. Eclipses occur only near the Lunar Nodes. Solar eclipses occur when the passage of the Moon through a node coincides with the New Moon; Lunar eclipses occur when the passage coincides with the Full Moon.


The Nodes are the “head” (North) and “tail” (South) of the cosmic Dragon (“T’li” in the Sefer Yetzirah). Medieval commentators Saadia Gaon, Shabbtai Donnolo, and Ibn Ezra, among others, identify the “Head” and “Tail” of the Dragon in the Sefer Yetzirah with the Lunar Nodes.

The Sefer Yetzirah, which is the foundational text of Jewish astrology, states:


The (Celestial) Wheel in the World is like a King in his province (country, land).


The Heart within the human being is like a King at war.


The Talmud and ancient Jewish mystical texts such as the Sefer Yetzirah (as well as other “magical” texts of the pre-kabbalistic literature belonging to the school of “Merkevah Mysticism”) are the foundation of Jewish Astrology’s close attention to the significance of the lunar nodes and eclipses.


The Lunar Nodes during the time of the 336 BCE Eclipse were at 7 Capricorn (North Node) and 7 Cancer (South Node) [xiii]. The Zodiac Sign of Capricorn is ruled by the Planet Saturn (“Shabtai” in Hebrew), classical astrology’s Planetary Ruler of both Capricorn and Aquarius, strongly associated with the Nation of Israel and the Jewish People [xiv]. At the time of this Eclipse, Saturn was at 12 Capricorn, within a 5-degree orb of the North Node and therefore a powerful influence on the Eclipse.


There is no need to cite references to state unequivocally that Alexander’s reign, which ushered in the Hellenistic Era in Jewish History, had the most significant long-term impact on every aspect of Jewish culture, religion, and world-view than any other era in pre-modern history. Indeed, whether one believes the rabbinic enterprise which began at Yavneh was an adaption to or a rebellion against Hellenism, it was the Greek world-view, imported to post-exilic Judea through Alexander and those who came after him, which most profoundly influenced the development of Judaism until the Enlightenment. Taking the Solar Eclipse of July 336 BCE as the celestial portend of the ascension of Hellenistic culture and its subsequent impact on the Jewish people, the following is a brief examination of the latest phase of the historical trajectory of that event.


In the 20th Century, the North Node at 7 Capricorn coincided with the outbreak of World War I in August 1917, the beginning of the Arab Revolt in Palestine and the deadly Arab-Jewish riots of April 1936, the ascension of Gamal Abdel Nasser to the presidency of Egypt in November 1954 as well as the birth of future Egyptian President Abdel Fattah el-Sisi on November 19th, 1954.


The North Node was also at 7 Capricorn in June and July of 1973 during the time US President Richard Nixon’s secret Watergate tapes were discovered, as well as during the Lillehammer Affair and the formation of the US Drug Enforcement Agency.  Interestingly, the Total Solar Eclipse of June 30, 1973 (part of the Saros 136 Series), which was the last and longest eclipse of that Saros series (7 minutes and 4 seconds), took place when the North Node was at 7 degrees Capricorn.


February and March of 1992, during which the North Node was again at 7 Capricorn and Saturn was in Saturn-ruled Aquarius, saw the Bush-Yeltsin meeting at Camp David during which the Cold War was officially declared “over”, the signing of the Maastricht Treaty which formed the European Union (EU), the outbreak of the Bosnian War, and South Africa votes to end the Apartheid government.


The Talmud [xv] tells us that while Solar Eclipses are a negative omen for the non-Jewish nations, the total eclipse of the Moon is a negative omen for the nation of Israel. The next Total Lunar Eclipse visible from Jerusalem will take place on July 27/28, 2018, which is both Tu b’Av and Shabbos Nachamu, 5778. Saturn will be at 4 Capricorn during that Eclipse, considered “conjunct” (with a -3-degree orb) of the sensitive 7 Capricorn degree, and the Full Moon in Aquarius (co-ruled by Saturn) opposite the Sun in Leo and the North Node in Leo is a significant omen for the Jewish Nation.


Immediately prior to the Lunar Eclipse on Shabbos Nachamu 5778, the Planet Mercury, the “cosmic messenger”, stations Retrograde at 23 Leo, closely conjunct the Natal Mars position of Israeli Prime Minister Benjamin Netanyahu, and halfway between the Natal Mars and Natal Saturn positions of the chart of the Modern State of Israel. Occurring in the “public” 10th House of “career and vocation”, this Mercury Retrograde will not happen in a secluded corner or under cover of darkness; but front-and-center for all the world to see.


Mercury’s Retrograde “message” for the Israeli government and the Netanyahu coalition, delivered via communication channels such as the Mercury-ruled media might go something like this:


As the Jewish Encyclopedia [xvi] explains:


Once when King Belshazzar was banqueting with his lords and drinking wine from the golden vessels of the Temple of Yhwh, a man's hand was seen writing on the wall certain mysterious words. Frightened by the apparition, the king ordered his astrologers to explain the inscription; but they were unable to read it. Daniel was then summoned to the royal palace; and the king promised him costly presents if he would decipher the inscription. Daniel read it "Mene, mene, tekel, upharsin" and explained it to mean that God had "numbered" the kingdom of Belshazzar and brought it to an end; that the king had been weighed and found wanting; and that his kingdom was divided and given to the Medes and Persians (Dan. v. 1-28).
How exactly this might play out on the political stage is anybody’s guess, but aspects to the Luminaries suggest a change in government, leadership, or political structure is indicated. A radical and sudden change in leadership may indeed be “in the stars” for the Modern State of Israel in 2018. Time alone will tell.

[xiv] M. Glazerson, “Above the Zodiac”, pp. 98-109, specifically the discussion of Planetary Rulership of the two Saturn-ruled Zodiac signs of Capricorn and Aquarius, and how they relate to the Jewish people. Also see Sefer Yetzirah.

·        All references to astronomical for the 20th and 21st Centuries are from the Astrolabe World Ephemeris series.

·        All references, unless otherwise noted, to historical world events of the past by year and month are from Wikipedia.