The T'li in The Sefer Yetzirah : The Karmic "Hook" in Your Natal Chart

I've been looking at the astrological materials in the Sefer Yetzirah. Of particular interest is the T'li, (  תלי ), the celestial dragon which is said to be "like a king upon his throne" in the universe. T'li is the Lunar Nodes, the North/South Nodes, which in Kabbalistic Astrology are indicators, by Sign and House, of the soul's primary Tikkun in this current gilgul (incarnation).

Using A. Peter Hayman's critical edition of the Sefer Yetzirah, which examines the three medieval recensions  (K: Short Recension, A: Long Recension, C: Saadia Gaon's Recension), I looked at  Section 59, the only place in the Sefer Yetzirah where the T’li is mentioned in all three Recensions. With only very minor variations in one word, Section 59 as follows:

The striking thing about the T’li here is the power ascribed to it.  The T’li here is positioned as greater than and in fact encompassing of both the Gilgul (“Wheel”, translated by Hayman as “celestial sphere”) and the Lev (heart). The T’li in the universe has power over / controls all, like a king on his throne. The Wheel (the celestial sphere, or the array of constellations around the earth) controls time, which creates boundaries, divisions and sub-divisions indicating ownership, like a king in a province (“medina”, country, state, or sovereign province characterized by a distinctive or singular ruler, bounded by borders). The heart in mankind controls his actions, like a king at war who must focus all his strength and effort to overcome an enemy.

Speculation about what the T’li might be abounds in medieval commentary. Scholars and commentators don’t even agree on the source of the word itself. The word t’li seems to be related to the verb TLH ( תלה) – to hang. In the Torah it is mentioned in the context of Esau’s hunting gear, as Isaac asks Esau to “take your gear, your t’li and bow” (Genesis 27:3). The chief baker is told he will hang on a tree (   תלה), cursed is the one who is hanged on a tree (Deut. 21:23), Absolom was seen hanging in an oak by his hair (2 Samuel 18:10), etc. In these and the rest of the some 28 uses of one or more verbal stem versions of the root TLH found in TaNaCH, always in the context of hanging, being hung, dangling, etc. The translation of T’li into “hook” follows that meaning.

Physician and commentator Shabbtai Donnolo, born in 913 at Oria in Byzantine Italy, discusses the T’li in his Sefer Hakhmoni, his commentary on the Sefer Yetzirah, written between 946 and 982 [i]. “And what is the T’li? When God created the firmament above us, which is divided into seven heavens, He created the T’li from water and fire in the shape of a great dragon, like a great twisted serpent, and made for it a head and a tail and put it in the fourth heaven, which is the middle heaven, the abode of the sun …it is…through learning handed down through ancient books that we can get to know the T’li, its power, its rule, how it was created, its goodness and its malignancy” [ii]. Donnolo’s T’li is the cosmic dragon, possessor of great power and dominant in the universe. Scharf states in regard to Donnolo’s interpretation of T’li as that of dragon:  “‘Tli’ is a word of doubtful etymology and several interpretations. It is comparatively rare; there are less than a dozen sources where it occurs instead of, or in addition to, the common words for a dragon – nahash or tannin” [iii].

Saadia Gaon, writing in 10th Century rationalist , views the T’li in purely astronomical terms.  “I understand this to be a place where two orbits intersect …It is not a constellation resembling a dragon or any other creature” [iv]  Saadia’s perspective on the Sefer Yetzirah is a philosophical one, informed by the Muslim Kalaamist thinkers of his milieu, and in line with the prevailing doctrine of divine incorporeality seeks in his commentary on the Sefer Yetzirah to neutralize any magical or astrological elements, and proceeds to discredits the theory, of which he is apparently well aware, that the T’li refers to the celestial dragon.[v]

Donnolo’s T’li is “The Dragon, and it governs all the planets and constellations. The (celestial) sphere turns the planets, the constellations and the luminaries. This sphere is set within the depths of the firmament, and the constellations re permanently attached to it, never straying from their fixed position. This sphere surrounds the firmament to the south, the north, the east and the west, and the Dragon stretches within it from end to end, like a cross-beam…and it is stretched out in the middle of the sphere, from the central mid eastern point to the central mid western point” [vi].

This T’li, the “hook” upon which the universe itself hangs, is depicted as a serpent eating its own tail in illustrations, such as this one taken from the 9th Century aggadic Pirkei de Rebbe Eliezer. 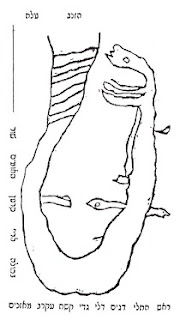 Some have speculated that the T’li might be a reference to the axis mundi [vii], the Ptolemaic system’s imaginary line bisecting the spherical universe, which turns on a fixed axis (axis mundi) connecting the two terrestrial poles (north and south), passing between them through the center of the earth. Donnolo in his Sefer Hakhomi describes the Dragon’s position in the “Fourth Sky” which contradicts the Ptolemaic definition of the axis mundi [viii].  Donnolo’s dragon “darkens the light of the two luminaries and the five planets, it moves the luminaries forward and backward and the planets and constellations from east to west and from west to east; it draws the planets back and holds them in one place, preventing them from straying either forwards or backwards…it cannot be seen with the naked eye but rather it is by the study of ancient texts transmitted to us that we gain knowledge of the Dragon…and how the twelve constellations are attached to it” [ix].
The idea of a serpent connecting and controlling the universe and the importance of the North and South Lunar Nodes in predicting eclipses is illustrated in “The Dragon of the Lunar Nodes and the Eclipse Points”, from Kircher's Ars Magna Lucis et Umbra.

Figure 3 “The Dragon of the Lunar Nodes and the Eclipse Points”, from Kircher's Ars Magna Lucis et Umbra.

Of the entire celestial phenomenon, eclipses are the most important and significant in Jewish understandings of astronomy and astrology (indistinguishable in their ancient, historically undifferentiated phase). Eclipses are tied to the fate of nations as well as of individuals. These beliefs are detailed the Talmud: “At the time when the sun is eclipsed, it is an unfavorable period for the world. A parable: This can be compared to a human king who made a feast for his subjects, and placed a lantern before them. When he grew angry with them, he told his servant, ‘Take away the lantern from before them, and place them in darkness!’"  (Talmud Bavli, Succah 29a). Succah 29a also says that solar eclipses occur for four different reasons: 1) If a Torah scholar is buried without being adequately eulogized; 2) If a betrothed girl is raped and nobody responds to her cries; 3) Homosexuality, and 4) Two brothers being killed at the same time. The Talmud in Succah 29a continues:

Just as the path of the lunar nodes predict the constellation and the degree therein an eclipse will occur, and in Jewish thought the eclipses are tied to the fate of nations, the function of the Lunar Nodes in astrology is tied to the fate or destiny of the individual.

Although references to the nodal function of predicting the fate or destiny of an individual abound in modern astrology [x]  and are used by many modern astrologers to describe the evolution of the soul in the present incarnation, Donnolo may well have been aware of ancient Arabic astrology’s teaching on the caput and cauda, the two lunar nodes described by Abu Ma’shar (787-886) who wrote extensively about their function in his Kitab al-mudhal al-kabir (“Great Introduction to Astrology”) and in Kitab tahawil sini al-alam (“The Book of Revolutions of the World-Years”), works that were greatly respected by the Byzantine astrological tradition in which Donnolo operated during the 10th Century [xi]. Whether Ma’shar drew on knowledge of Sanskrit (Vedic) astrology’s Rehu (“Dragon’s Head”) and Ketu (“Dragon’s Tail”), which may have reached Arabic astrology via Alexander’s foray into India (my speculation), which in Vedic astrology the lunar nodes take an even more prominent and important position than they do in Western astrology, is impossible to ascertain. Nevertheless, whether the association of the lunar nodes with the dragon originated with Ma’shar or if he derived them from a Vedic source, their function is the same: prediction of and control over the fate, “karma”, and destiny.

The celestial beast whose body twists and stretches across the universe, holding the stars in place, are seen through astrological eyes as “Caput” and “Cauda” in Muslim astronomy and “Rehu” and “Ketu” in Vedic astrology,  the means by which eclipses are predicted and tracked for the purpose of determining whether misfortune is about to befall the nations or Israel. The dragon upon whose undulating scales the starry universe is hung, holds the fate and destiny of all creation between his head and tail. “The T’li in the universe is like a king upon his throne” – sovereign over all, as the North and South lunar nodes in astrology are sovereign over human fate.