The upcoming Lunar Eclipse / Super "Blood" Moon on Tu b'Shevat (January 20) will be visible all over North and South America. The Eclipse occurs at 9:16pm Pacific time (12:16am January 21 Eastern, 7:15am Israel time).
Lunar Eclipses happen predictably every year, only during Full Moons. Any given Jewish Year includes between six and seven Full Moon holidays: Tu b'Shevat, Purim (Purim Katan during leap years as well), Pesach, Pesach Sheni, Tu b'Av, and Sukkot.
The Talmud discusses eclipses and their effect on the nations of this earth. From the Babylonian Talmud, Sukkah 29a:
When the sun is in eclipse, it is a bad omen for the whole world. This may be illustrated by a parable. To what can this be compared? To a human being who made a banquet for his servants and put up for them a lamp. When he became wroth with them he said to his servant, ‘Take away the lamp from them, and let them sit in the dark’. It was taught: R’Meir said, whenever the luminaries are in eclipse, it is a bad omen for Israel since they are inured to blows. This may be compared to a school teacher who comes to school with a strap in his hand. Who becomes apprehensive? He who is accustomed to be daily punished.
The basic idea is that lunar eclipses are trouble for the Jewish nation, while solar eclipses mean trouble for the non-Jewish nations - yet Israel still suffers, as the non-Jewish nations take their troubles out on their convenient scapegoat, the Jews. This is the Talmud's poetic way of saying that the Jewish people experience trouble in this world in predictable, regular patterns - just as predictable and regular as the eclipse cycles themselves. The writers of the Talmud were simply managing expectations rather than making prophetic statements.
For those who are all tied up in anticipatory knots from reading predictions about the impending eclipse, keep this in mind: There was a full Lunar eclipse on Tu b'Shevat in 1999, 2000, 2009, 2018 as well as this year. There was a full Lunar eclipse on Purim in 2007 and on Purim Katan in 2008, as well as on Sukkot 2014, Pesach 2015, and Sukkot 2015.
With anywhere from six to seven Full Moon Jewish holidays per any given year, and anywhere from four to six (depending on the year) eclipses (solar and lunar) per annual eclipse cycle (there's NEVER a year without eclipses!), the statistical likelihood of an eclipse falling on a Jewish holiday is predictable and normal.
Lunar Eclipses ONLY happen on Full Moons. The term "Super Moon" is used when a Full Moon is at perigee (the closest it comes to Earth during the year). But not all "Super Moons" come with an Eclipse. A "Blood" Moon occurs during an eclipse when sunlight is filtered through the Earth's atmosphere. This eclipse is also being called a "Wolf Moon," which is one of the Native American names for the mid-winter Full Moon of January. Some tribes call it the Full Snow Moon. Not all "Wolf Moons" (or Full Snow Moons) or any other name for a Full Moon feature a Lunar Eclipse.
January's lunar eclipse comes two weeks after the Solar Eclipse / New Moon which inaugurated Chodesh Shevat. This year (5779) Chodesh Shevat began smack in the middle of Solar Capricorn, it was kicked off with the Solar Eclipse / New Moon conjunct transiting Saturn on January 5th and 6th. Less than a day later, Uranus stationed Direct at 29 degrees (the “ultimate” or “critical” degree of any sign) of Aries after his latest Retrograde period, which began last August. This makes Chodesh Shevat 5779 extra-powerful.
Shevat is the month associated with Aquarius. Both Uranus )the modern planetary ruler of Aquarius) and Saturn (the classical planetary ruler of Aquarius) are exerting pressure in the effort to bring about change – Saturn in his slow and steady way, Uranus in his abrupt, sudden, and surprising way. These Celestial Titans are tag-teaming in the Cardinal (initiating) signs of Capricorn and Aries (aided by Mars’ recent ingress into his home sign) to overcome the tectonic pressure generated by fear-based resistance to what we all know in our heart is inevitable change.
Comfort zones will be shaken, concepts about security upended, definitions of both “ally” and “enemy” will be reconsidered, ideals will be challenged. The universe is sending a memo: did you receive it yet? The times, they are a-changin’.
at January 21, 2019 No comments:

Aquarius the Water-Bearer in Jewish Art

Human imagery in Jewish art wasn't as "assur" as some might think. Depictions of "D'li" - the water bucket, the symbol of the zodiac sign of Aquarius, often featured the water-bearer himself in human form.

The medieval commentator Abraham Ibn Ezra tells us: "Aquarius rules over Israel," not only in his long commentary on Exodus but in his "Sefer ha-Olam" as well. Ibn Ezra reminds us the Talmudic maxim "Ain Mazal l'Yisrael" ("there is no constellation that rules over Israel") applies only when Israel is keeping every jot and tittle of the Torah. But when has that ever happened? When Israel (corporately) doesn't keep the Torah, Israel is just as subject to the celestial influences as all the other nations. 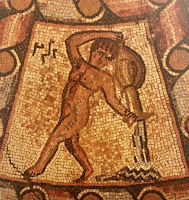 Depiction of Aquarius from a Megillat Esther, Italian, 18th Century. 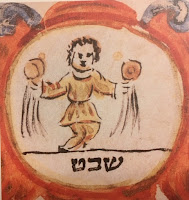 Image of the Water-Bearer, Aquarius, from a mahzor for the three festivals, Vilna, 1844, 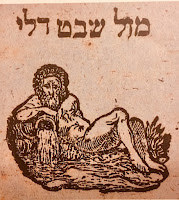 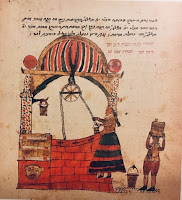 The Hebrew month of Shevat, which runs from January 7 – February 4 of this year, is associated with the Fixed Air sign of Aquarius (D’li, the water bucket) and the Tribe of Asher.

Aquarius is one of the few Mazzalot which has two planetary rulers. In classical astrology, “Shabbtai” (Saturn) ruled both Capricorn and Aquarius. After Uranus (Oron) was discovered in the late 18th century, modern astrology assigned Uranus to the rulership of Aquarius. Yet Aquarius retains vestiges of Saturnian energy to this day and should be considered in the individual’s natal chart equally with Uranus in terms of chart rulership, if the individual has Aquarius on the Ascendant.

Asher, the Tribal ruler of Aquarius, comes to teach an important lesson about how sometimes material blessings obscure our self-perception, impeding our ability to do the hard work of self-scrutiny which leads to self-improvement.

Both Jacob and Moses blessed Asher (which means “Happy”) with abundance and prosperity, from which he would support his brethren. Yet Asher’s riches created enough of a comfort zone for him that he didn’t prioritize conquest of his Tribal portion and failed to drive out the Canaanites altogether from his lands. Although he joined his brethren in war against “foreigners” (Midianites, Amaekites and others), he wasn’t punctilious about ridding his own inheritance of the Canaanites.

These external examples come to teach an internal reality. Aquarius is a loyal friend and humanitarian, but sometimes indifferent to his own vulnerabilities. Although the most idealistic of all zodiac signs in terms of his perception of others, if protected by prosperous circumstances, he won’t strive hard for self-perfection. Asher finds redemption through humility, as illustrated by when his Tribe accepted Hezekiah’s invitation to the Tribes of the Northern Kingdom to celebrate Passover in Jerusalem (2 Chron. 30:11). The part of our own personal natal chart where we find Aquarius is where we find our highest expression of friendship, brother/sisterhood, loyalty to community, and humanitarianism.

This year Chodesh Shevat begins smack in the middle of Solar Capricorn and is kicked off with the Solar Eclipse / New Moon conjunct transiting Saturn. Less than a day later, Uranus stations Direct at 29 degrees (the “ultimate” or “critical” degree of any sign) of Aries after his latest Retrograde period, which began last August.

Both Uranus and Saturn are exerting pressure in the effort to bring about change – Saturn in his slow and steady way, Uranus in his abrupt, sudden, and surprising way. These Titans are tag-teaming in the Cardinal (initiating) signs of Capricorn and Aries (aided by Mars’ recent ingress into his home sign) to overcome the tectonic pressure generated by fear-based resistance to what we all know in our heart is inevitable change.

Comfort zones will be shaken, concepts about security upended, definitions of both “ally” and “enemy” will be reconsidered, ideals will be challenged. The universe is sending a memo: did you receive it yet? The times, they are a-changin’.
at January 07, 2019 No comments:

Solar Eclipse / New Moon in Capricorn on Sunday, January 6 at 3:28am Jerusalem time. Molad of the new month of Shevat on Sunday at 11:13 (14 chalakim) AM, followed by Rosh Chodesh Shevat on Monday. 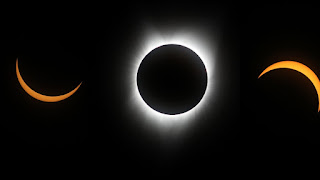 Yes, this year Chodesh Shevat begins literally in the middle of Solar Capricorn (15 degrees). Both Capricorn and Aquarius (the constellation of Shevat) are ruled by Saturn ("Shabbtai") in classical astrology. Saturn himself, old Father Time, sits only 3 degrees away from the Sun/Moon conjunction that is the New Moon / Solar Eclipse.

Jupiter ("Tzedek") in Sagittarius semi-sextiles Saturn in Capricorn, and the Sun/Moon eclipse.

Some possible reflections of these celestial portents include but are not limited to:

- Resolving financial matters in a "Lucky" way. This does not mean "gambling," it means a lucky break, a payoff, recognition of your mature and responsible decision-making which manifests in good fortune or a significant upgrade in a long-term and somewhat stressful material world austerity period.

- A greater degree of Self-Acceptance and the ability to integrate work-in-progress, imperfect parts of Self into waking consciousness.

- Expanded joy of accomplishment. Not a giddy happiness but a deep, profound, and perhaps surprising joy springing from the internalization of your own competency, developed by the combination of time and hard work.

- The regenerative power of joy triggers a greater ability to reestablish affinity with your own body and experience your own vitality and life-force, regenerating and reviving both body and soul.

May the celestial reflection of the terrestrial conditions shine beautifully upon you, and unfold with astounding grace!
at January 04, 2019 No comments: