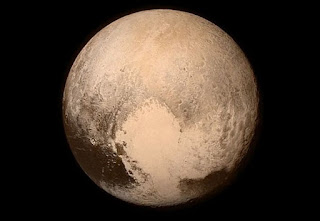 July 2015 has been an historic month for Pluto. After a nine and a half year journey, the spacecraft "New Horizons" finally reached the outer limits of our galaxy, and has sent us stunning photographs, startling and unexpected data, and generated a myriad of new questions regarding the mysterious, far-off  of the planet (nee asteroid, nee planet) at the furthest edge of not only our solar system, but our imaginations as well.

Pluto was "discovered" in 1930, but astronomers and astrologers had long suspected it's existence. Pluto was assigned astrological rulership of Scorpio, previously associated with Mars (classical co-ruler of both Aries and Scorpio).  Astrologers, philosophers and those concerned with symbolic meanings and archetypes understood at once that Pluto's mythical qualities - power, desire, passion, secrecy, remoteness, intensity, focus, privacy - belonged to the zodiac sign of Scorpio, associated with the Hebrew Month of Cheshvan.

Pluto's symbol is that of a phoenix rising from the ashes. Pluto understands, embodies and demonstrates the spiritual and biological truth - that something must die in order for something else to be born.  Pluto's "discovery" in 1930 coincided with the most intense period of human history, one which saw the rise of Nazi Germany, the Holocaust, WWII and the discovery of atomic power (ruled by Pluto). From the ashes of the Holocaust rose a reborn State of Israel. The "Pluto Generation" saw the rebirth of a people, a nation and a hope that had all but been extinguished in the ovens of Europe.

Cheshvan, the Hebrew Month associated with Scorpio and therefore Pluto, is known to be the "Month without holidays" in the Hebrew Calendar (read more about the "incepted" months of Cheshvan and Iyar in the Jewish Year HERE). Yet there is a well-know midrash that teaches that the Holy Temple itself, the Third and "Messianic" Temple, will be built during Chodesh Cheshvan. This third, final and "Messianic" Temple is promised to the Jewish People as not only a sign of redemption, but as the actual, physical place on Planet Earth from which universal love will flow to all peoples and all nations. This "font of all blessings" is prophesied to be build during the "deprived" month of Cheshvan, truly a "phoenix rising from the ashes" of history, time, death and rebirth.

Pluto reminds us that the (atomic) power, passion, intensity, focus and will that is associated with its symbols and archetypes is at work in our world as well as in our personalities. Everybody has Pluto somewhere in their chart. By House and by Sign, the position of Pluto illustrates the role of power, passion, personal ego, death and rebirth in your life.

A personal example: like many of my generation, I have Pluto in Virgo. It falls within my 11th House of the "Claal" - community, friends and friendships, affinity groups I belong to, the collective consciousness. At 2 Degrees Virgo, my natal Pluto sextiles my natal Neptune in Scorpio (Pluto's ruler) in my 1st House, supporting my "function" in the arena of the "collective" as one of transforming (Pluto) perception (Neptune) through the raising of consciousness (Scorpio) via analyzing. sifting and evaluating (Virgo) processes. The role I often play in friendships, groups to which I belong, affinity associations and the claal/collective is one of consciousness transformation. I have often acted as a "midwife" to bring to birth new levels of awareness - but first the old ones have to die so the new ones can be reborn. This is the function of Pluto in my natal chart. How it functions in your Natal chart is your own individual manifestation of that transformative energy.

A little about "rulership" of planets in both classical and modern astrology:

As stated elsewhere upon multiple occasions in my writings on astrology, the Tribe of Levi is not assigned a planetary ruler because, in the configuration of a person's natal chart, the pattern of the "Tribes around the Mishkan" it is the soul of the person which is the "Mishkan", and the Leviim around the inner circle of the Mishkan have each their own specific functionality (see "Your Inner Leviim" from this blog).

After the discoveries of Uranus, Neptune and Pluto, modern Astrology assigns planetary rulers as follows:

In Modern astrology, only Mercury and Venus continue as double-rulers of signs. However, most astrologers still consider the traditional co-ruler influence as at least worth noting, and some believe there's another undiscovered planet (famous astrologer Linda Goodman called the possible "ghost planet" by the name "Vulcan" and hoped upon its discovery it would be assigned as the "true ruler" of Virgo). Goodman also believed another planet, Horus or Pan-Horus, would eventually be discovered and assigned rulership of Taurus.

"Linda Goodman explains how previously other signs had different ruling planets before their true planets were discovered:
“Vulcan is the true ruler of Virgo, and is “the lame goddess of thunder,” since Vulcan is definitely a female planet. Let me explain what I mean by “the true ruler.”
An example: At one time, both Pisces and Sagittarius were ruled by Jupiter – until Neptune was discovered as the original and therefore natural (or true) ruler of Pisces. At one time, both Aquarius and Capricorn were ruled by Saturn – until Uranus was discovered as the original and therefore natural ruler of Aquarius. (Abraham Lincoln was a Saturn-ruled Aquarian, Franklin Roosevelt a Uranus-ruled Aquarian). Uranus was rediscovered by a farm boy named Herschel, and was called by his name at first. But metaphysicians knew that the planet’s true name was Uranus.
To , Aries and Scorpio were both ruled by and Scorpio, until Scorpio’s true and natual ruler, Pluto, was discovered. And so on.
Each time this repeated circle of discovery occurs, it manifests in the same pattern - or order of discovery - and the last two original planetary rulers to be re-discovered are always (in each cycle) Vulcan, the true ruler of Virgo – then Horus (Pan-Horus), the true ruler of Taurus. Virgo presently shares with Gemini the rulership of Mercury, although Mercury is the true ruler of Gemini, and is only “on loan”, so to speak, to Virgo. Just as Taurus presently shares with Libra the rulership of Venus, although Venus is the true ruler of Libra, and is only “on loan”, so to speak, to Taurus.” - Linda Goodman's Star Signs, quoted by  "Earth Woman/Virgo-Centric"


Linda Goodman believed that in the end, each of the 12 Zodiac Signs will have it's own planetary ruler.  That remains to be seen - but as things stand, it's obvious that the addition of the previously unknown (but suspected) planets to the zodiac has enhanced our ability to understand the more subtle workings of each sign - and therefore, our own selves.

Full Moons occur when the Sun and Moon are in opposite signs. The Sun in sensitive Cancer's Full Moon in practical, ambitious Capricorn this evening is supported by a gentle Trine from dreamy Neptune in watery, mystical Pisces. If you can imagine it, you can manifest it. Energetically speaking, it's a good time to take practical steps to fulfill your dreams. 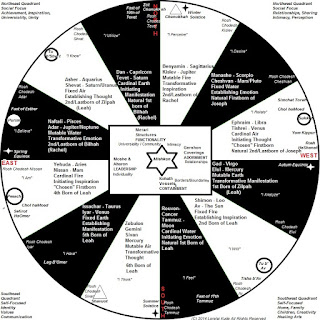 When we come to a turning point in the tide of time, we examine the quality of that time. During Reuven/Tammuz/Cancer it is important to refocus one's attention on family relationships, and to make repairs in areas of your life that concern food/home/mother/money.

Rededicate yourself to the mitzvah of "Kevod Av v'Am" (honoring your parents), check your mezuzahs to make sure they're in good condition, check the contents of your refrigerator to make sure you're eating right, and check your bank balance to remind you, no matter what the number, true security is not to be found in cash on deposit but in love on deposit in your heart.As the Wizard of Oz said to the Tin Man: "A heart is not judged by how much you love, but how much you are loved by others".