Leap year 5779 is a shana me’uberet (a “pregnant year”) on the Hebrew calendar. During pregnant years we add an extra (13th) month, which is Adar Aleph (also called Adar I or Adar Rishon). Adar Aleph 5779 kicks off February 5 with a two-day Rosh Chodesh, and runs through March 6, making the current year 5779 very pregnant with possibilities. The Talmud says in Ta’anit 29a: “When Adar comes, joy increases.” Count on enjoying an extended double-Adar celebratory season this year.
The Sefer Yetzirah teaches that each one of the 12 constellations (mazalot) correspond to a Hebrew month. During non-leap years and during Adar Bet of pregnant years, Adar is associated with the tribe of Naftali, which we will explore in-depth next month. This month, we ponder the mystery of Adar: the month that sometimes is one, and sometimes split in two. Jewish astrology divides Joseph into two tribes (Ephraim and Menashe, corresponding to Tishrei/Libra and Heshvan/Scorpio, respectively). During pregnant years, Joseph gets his own month: Adar Aleph, the “extra” month, hinted at by Joseph’s name in Hebrew, meaning “HaShem shall increase/add.”
Even though Chodesh Shvat ends February 4th, the Sun in Aquarius overlaps Hodesh Adar Aleph until solar Pisces begins on February 18th, blending the humanitarian, idealistic energies of Aquarius with the compassionate, empathetic and generous qualities of Pisces. The full moon of Adar Aleph on February 19th in clearheaded, rational Virgo (Betulah) stimulates the protective energy of Virgo’s tribal ruler Gad, “a troop.” Virgo’s weapons are analytic discernment, unfeigned humility, and a heart of service to others. Opposite the Sun in spiritual, sensitive Pisces (Dagim), Adar Aleph’s moon-month peaks with the perfect balance of reason and faith.
Adar Aleph 5779 – The “Joseph” month. May joy increase and blessings be added to all of Am Yisrael during this special time!

I don't really enjoy writing about political astrology, but Donald Trump's Natal Chart is SUCH a great and public astrological teaching example, I can hardly resist the temptation! So remember people, this is educational - and I'm doing this for you, not for me! :)

It’s almost as if Nancy Pelosi was working for the GOP when she didn’t consult an astrologer to pick a date for Trump’s delayed State of the Union speech, set to begin at 9pm Eastern time on Tuesday, February 5th. The Moon will have just entered Pisces, crossing into Trump’s 7th House, the place of partnerships (7th House is “We,” opposite 1st House which is “Me”).
Trump's emotional pitch will be to his base (“We”), those he considers to be his “partners” in his Presidency. The transiting asteroid Chiron at 29 degrees Pisces (the critical degree not only of Pisces but the entire 360 degrees of the zodiac!) in his 8th House (shared values, valuables, resources and intimacies) gives him the ability to articulate the collective pain and suffering (as he internalizes / externalizes it), but to whom does that pain and suffering pertain? The transiting North Node conjuncts his natal Venus/Saturn conjunction in Cancer in his 11th House gives a clue. “Security” is the keyword, and ancestral ties (Cancer) structured around patriotic institutions (Saturn) are romanticized (Venus) in his 11th House (his friends, community, collective, affinity groups). He will speak on themes of “Homeland” (Cancer) “Security” (Cancer again, but with Saturn), activating his “friends, community, collective, affinity groups,” which are not universal but particularistic, have a basis in shared heritage (Cancer again) and heirlooms (like the flag). The pain and suffering of "Americans" (his particular definition of what that term means) who share his world view and identity is the pain and suffering channeled by Donald Trump during the transit of Chiron at 29 Pisces.

Transiting Jupiter conjunct his natal Moon in Sagittarius in his 4th House will enlarge and magnify his inner self-perception (4th House) of himself as the child of a “good” and “virtuous” immigrant (Sagittarius), i.e. his mother, Mary Anne MacLeod, born in Scotland and immigrated to the United States in 1930, working as a domestic servant in Long Island before marrying Fred Trump in 1936. Trump’s natal chart betrays his inherit insecurity about the nature of his own roots, Mary Anne being symbolized by his natal Moon (“mother”) in the 4th House (nuclear home and family, the “Hidden Parent”). Transiting Jupiter super-sizes this inner image of “mother,” while transiting asteroid Ceres (archetype of the mother who will literally go to hell and back to rescue her child, as embodied in the Ceres (Demeter) / Persephone (Proserpina) / Hades (Pluto) myth) conjuncts Trump’s Black Moon Lilith in 4th House Sagittarius. Trump will defend his actions at the border with immigrants as a defensive measure against what he sees as an encroaching threat. He will most likely exaggerate and dramatize (Sagittarius) about immigrant women and children in distress or bondage (Black Moon Lilith) who need to be rescued (Ceres). The transiting Sun in Aquarius is conjunct his natal asteroid Ceres in his 6th House (ruling “employees” or power differential relationships with unequals) literally makes him believe he is “rescuing” women and children with his immigration policies, including separating families at the border and incarcerating children in detention centers.

Aggressive Mars in Aries transiting his 9th House (“Foreign” or “exotic” people, places and things”) will reflect in pugnacious, war-like language, possibly via threats against other nations. Unstable, erratic Uranus at 29 Aries (the ultimate degree of the Cardinal Fire Sign) in Trump’s 9th House shows his unpredictability and seemingly capricious, inconsistent and often surprising behavior around foreign people and powers.
Finally, Trump’s progressed Moon is at 24 Leo conjuncts his natal Mars in Leo in his 12th House, very close to his Ascendant (“Rising Sign”) at 29 (again, the “ultimate” degree of any sign) Leo. He is emotionally unconscious (Moon in 12th House), driven by his subconscious and instinctual mind, perceiving enemies in hidden places (Mars in the 12th House) against whom he must roar (Leo) and rampage (again Leo) and fight (Mars).

Trump’s progressed Venus at 18 Libra conjuncts his natal Jupiter in Libra in his 2nd House, making him feel (despite any evidence to the contrary) invincible and as if he is truly fighting on the side of good and justice (Libra). This transit also says a lot about money: Progressed Venus on Jupiter in the 2nd House is expecting a major windfall (payoff?). Progressed Mars transiting Libra / 2nd House makes him the defender of his personal values and valuables; expect to hear the word “fair” a lot (Libra), although expect to hear it used aggressively (Mars).

Transiting Moon in Pisces during State of the Union directly opposes Trump’s progressed 1st House Sun in Virgo conjunct his Ascendant. Because he was born during a Sun/Moon opposition (during a Lunar eclipse), this natal angle of Sun/Moon opposition will support rather than hinder his efforts.
As I said earlier, Nancy Pelosi should have consulted an astrologer prior to scheduling Trump’s State of the Union for 6pm Pacific time on Tuesday, February 5th. Virgo Rising at 29 degrees (again, the “ultimate” degree of any sign) in Washington, D.C., just as the TV cameras begin to roll makes Mercury the ruling planet of the event, and Mercury is the planet of communication. Transiting Chiron at 29 Pisces directly opposite the Ascendant of the speech itself hints at the embodiment via speech (Virgo at 1st House cusp) of the collective pain “We” share (if “we” includes anyone Trump believes to be in his affinity group, i.e. “Americans” – at least those he believes to be legitimately American, rather than the universal “American” ideal). Transiting Mercury at 22 Aquarius opposes Trump’s natal Mars in Leo, stimulating words and ideas (Mercury) he may intend to signal inclusiveness (Aquarius) but filtered through a defensive lens (Mars), ultimately read as exclusiveness (Leo).

The Ascendant of the State of the Union conjuncts Trump’s progressed Moon. With all this being said, it should be a triumph for Trump and a lesson for the Democrats to consider the stars before giving their greatest foe an open mic.

Pictured herin: Trump’s natal chart with Transits, Trump’s Natal Chart with Transits & Progressions for February 5th, and the chart for Washington, DC at the scheduled time for the State of the Union address.
at February 04, 2019 No comments:

So pleased and proud to announce that my monthly "Astrolojew"  horoscopes have found a new home at the Jerusalem Post! You can read them every month (in sync with the Hebrew Chodeshim) in the Sunday Supplement. According to the emails I'm receiving from friends in Israel upon waking this morning, the print version is announced on the front page and taking up 40% of the back page! Forecast for me? I'm feeling fantastic, thank you very much! 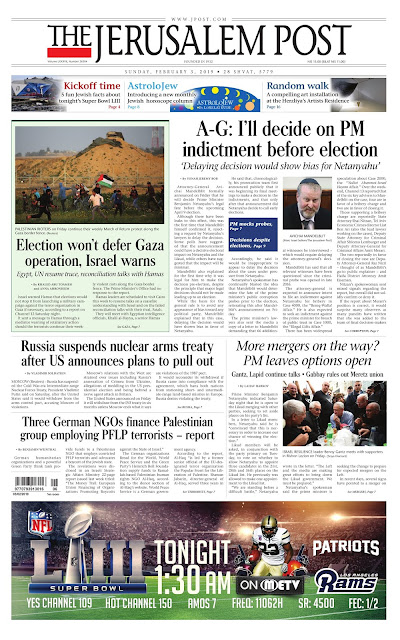 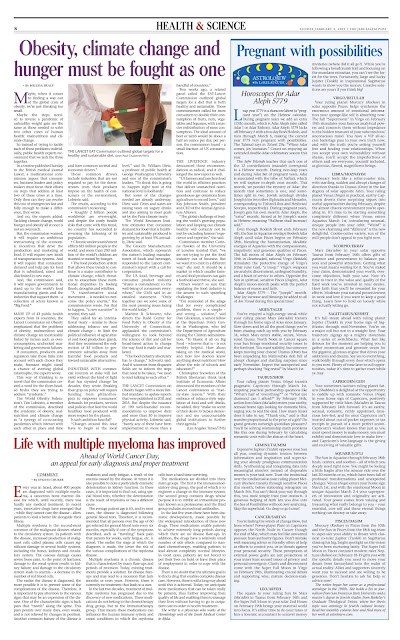