BaMidbar ("Numbers") Chapter 2 - A Picture of Heaven AND Earth 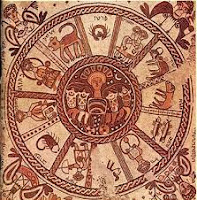 In just two weeks we'll be reading Parsha BaMidbar, the first chapters of the 4th Book of the Torah, "BaMidbar" ("In the Desert," or as the English translation says: the Book of Numbers). Chapter Two describes the positions of the 12 Tribes around the Mishkan - a perfect picture of the Zodiac itself, each Zodiac Sign corresponding to the Tribe to which it is assigned.

Yehuda (Aries) to the East, Ephraim (Libra) to the West, Dan (Capricorn) to the North and Reuven (Cancer) to the South. Each of these four Cardinal (initiating) Tribes is assigned a position that corresponds to an equinox or solstice, and beneath the banner of each of these four Cardinal Tribes are the two tribes associated with each particular quadrant - exactly as described in the Torah.

The Zodiac is a gigantic CALENDAR, it's an ILLUSTRATION in the Heavens of a reality on Earth - the 12 Tribes around the Mishkan, the energy of which creates a conduit for holiness .... just as it does within our own selves.

How does this work?

It's a PROGRESSION, a journey, like the journeys of the Mishkan in the desert was.

Following each Cardinal (turning point) Tribe is one Fixed Tribe/Sign and one Mutable (changeable) Tribe/Sign.  We begin in the East - as we say "let's get oriented," that means let's face EAST (towards "the Orient"). In ancient times and certainly in the Biblical era, directions were not fixed North/South as we do now, using the compass method. We fixed directions by "orienting" ourselves East, towards the Sunrise.

To the East, initiating Spring is Cardinal Fire Sign Yehuda/Aries/Nissan, followed by Fixed Earth Issachar/Taurus/Iyar and Mutable Air Zevulon/Gemini/Sivan. Then another season/corner/direction is turned and it is Summer and South; where Cardinal Water Reuven/Cancer/Tammuz is followed by Fixed Fire Shimon/Leo/Av and Mutable Earth Gad/Virgo/Elul.

Each of the Four Elements (Fire, Water, Air and Earth) correspond to one of the Four Holy Cities in Eretz Yisrael: Jerusalem (Fire), Tiberius (Water), Tsfat (Air) and Hevron (Earth).

What's in the CENTER of this configuration? The Holy Mishkan - the "tabernacle" built to house the most holy things, and surrounding it on 4 sides within the circle itself are the Levites (who have no tribal homeland but exist within the boundary of all the other tribes). This is a picture of the human personality and soul - the Mishkan is your NESHAMA, your inner soul, the seat of holiness and the place where all your "most holy things" are kept. SURROUNDING the "mishkan" of your soul are your "inner Leviim," those personality traits which (ideally) help minister from the "offerings" of your inner 12 Tribes and facilitate the flow of holiness from inside out.

Everybody has ALL 12 SIGNS/TRIBES in their personal Natal Chart. Where does YOUR "inner Yehuda" appear in your chart?  Where do you "begin," what's your journey like, where did you come from and where are you going? In which quadrant/tribe are the majority of your Planets clustered, and what angles and relationships do they make to one another, and is there a story there?

Reflective Rectification Astrological Analysis can help you answer those questions, and give you an illustration of your own personal journey. Email lorelaikude@yahoo.com for details.
at May 17, 2011