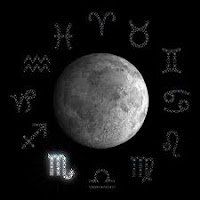 The Moon will be full today (Tuesday, May 17th) at 2:09pm Jerusalem time. The Full Moon during the month of Iyar (Taurus) is always full in Scorpio (Cheshvan) because ALL Full Moons are full in the sign OPPOSITE the Sun's position.

Scorpio is famous for many things, not the least of which is sex. Why sex? Because sex is the ultimate Scorpionic value - it's the deepest way to share between two people. Scorpio seeks transcendence through fusing with another, through that kind of intimacy that dissolves the borders between "you" and "me," between "mine" and "ours."

Cheshvan, the month associated with Scorpio, is ALSO the 2nd month of the year (with Tishrei as the first) on the OTHER side of the zodiac/year ... just as Taurus / Iyar is the 2nd month of the year (with Nissan as the first) on THIS side of the year. The relationship between the 2nd month-sign/8th month-sign is an interplay between the material world (Taurus, Earth) and the world of "Tohu v'Bohu" of pre-creation (Scorpio's subterranean, Pluto-like "Phoenix rising from the ashes" role, best illustrated by the Great Flood (the Mabul) described in Parsha Noach which happened during Cheshvan, the month of Scorpio.

Scorpio wants to "die and be reborn and then mysteriously saved," in the words of Bob Dylan ("O Sister"), Scorpio wants to take you deeper, to the deepest place, and then higher, so high there's barely enough oxygen to breathe. Just when you're about to faint Scorpio will resurrect you with a kiss so profound it will have seemed to come up from the primeval flood itself, washing your soul away from your body ... at least for a moment or two.

This Full Moon in Scorpio opposes the Sun, Mercury, Venus and Mars in Taurus. The energies are reflective of the dynamic between emotional possession (Moon in Scorpio) and personal values (all the other planets in Taurus). What is "value," and what are our "values?" Taurus is often associated with money and materialism, and this is one kind of "value." But on a deeper level, Taurus is concern with our VALUES, which is why it's the only month of the Jewish Year completely enclosed by the Sefira (we start counting the Omer during Nissan and finish in the beginning of Sivan). In astrology a "house" (one of the 12 sub-divisions or "Tribes") is called "incepted" if it's beginning and end is contained within the borders of the signs before and after it. Taurus is, in a sense, the only "incepted" time of year because the Omer is counted every night of Iyar, and counting the Omer is the ultimate activity which creates the space to meditate on one's "values."

What do you value? What are your values? Do you hold them near or share them? Are you intimate only with those who share your values, or who value you, or whom you value? How do you allow yourself to be de-valued by those around you?

This Full Moon in Scorpio falls SOMEWHERE in your chart. Where? For a personal analysis of how Scorpio/Cheshvan works in your chart, contact Lorelai at: lorelaikude@yahoo.com to ask about Reflective Rectification Torah-Based Astrological Analysis services.

Their unification is the aspect of - INNER LIGHT... http://jewishteachings.blogspot.com/2010/06/do-soul-mates-exist-by-hakham-mutzafi.html