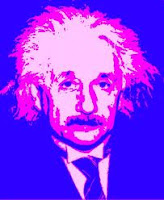 "The intuitive mind is a sacred gift and the rational mind is a faithful servant. We have created a society that honors the servant and has forgotten the gift." ~Albert Einstein
It doesn't take an Einstein (as our Tribal grandmothers would say) to see the obvious: The Times, they are a-changing. Maybe a more apt lyric would have been: "It doesn't take a Weatherman to know which way the wind blows."
We feel it, we see it with our spiritual eyes, it's palpable to those who live right here at "Ground Zero" of all energetic realities - Jerusalem, Center of the Universe.
Diplomatic Venus is moving into practical, discriminating Virgo today (0 Virgo), and Mercury Retrograde continues it's second curtain-call through the final dramatic degrees of Leo. Tomorrow the Sun at 29 Leo, King of the Jungle, will oppose idealistic, distortion-prone Neptune at 29 Aquarius, the Mad Scientist.
The 29th Degree of ANY sign is what's known as a "Critical Degree" in Astrology. In the case of the 29th Degree, it's as if all the energy from the previous 1-28 Degrees have rolled downhill and pooled into the 29th Degree. It's the critical essence of a Sign - just as 0 Degrees of ANY sign is the absence of that essence, containing only the promise or potential.
Venus is almost DISABLED until it reaches 1 Degree (a Planet is not established in a Sign until it reaches 1 Degree). This gives the Sun-Neptune Opposition more weight, energetically. The absence of diplomacy and balance with the potential for fanaticism (Sun-Neptune opposition) does not create ideal conditions for an experience of undistorted reality.
Add Mars at the Cardinal Critical Degree of 13 Cancer (protectiveness, home, "mother," money, security) and it begins to sound a little like ... Elmer Gantry on steroids.
Beware of hyper-distorted, idealistic, delusional "humanitarian" (Aquarius) and ego-maniacal, fiery folks with a sense of self-righteousness, entitlement and "Destiny."
I'm just sayin' ...
at August 22, 2011

Noise Blockers and Other Remedies said...


I'll have you know we're the movers and the shakers of this world. So there.