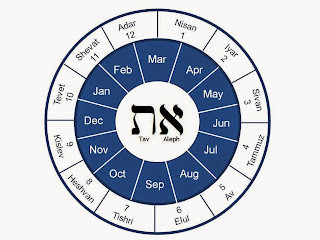 The cycle of sacred time we call the Jewish Year is laid out in the almost supernaturally wondrous Hebrew Calendar. The importance of this tremendous gift - that of making time itself sacred - was the very first of many gifts given to the newly liberated slaves who were about to become a Nation.

Rosh Chodesh, the "Head of the Month", was the first mitzvah given to the about-to-be-born Nation of Israel. Indeed Rashi, in his commentary on Genesis 1, begins by asking why the Torah didn't start with the commandment of Rosh Chodesh, as given in Parshat Bo, rather than the historical background of the Book of Genesis. He answers by telling us that in future times when the nations of the world accuse Israel of taking a land which wasn't their own, the entire Book of Genesis and in fact up until Parshat Bo - Exodus 12:1 - exists to prove to the world that God is the sovereign creator of heaven and earth and that all belongs to Him, and He will choose to give whatever is His to whomever He chooses, and He chose the Land of Israel (known at the time as Eretz Canaan) to the Jewish People.

Why does the Torah place the giving of the commandment to observe Rosh Chodesh prior to the actual deliverance from Egypt? Why give slaves the gift of time? Only free people own their own time. The gift of time is the gift of sovereignty, of independence, of freedom. The secret to the arranging of sacred time and the enabling of the Hebrew Calendar was given to still-slaves so that when Jacob's children became the Nation of Israel, they would not forget that they too were once slaves, as all the other nations were and are enslaved to false gods and idols - and that the function of sacred time is to create order for harmony and holiness. So too when we incorporate the inner symbolism of the Planetary configurations of not only our own personal natal charts but the movements and motions of the heavens into our spiritual practice, we must not forget that unless we have divinely given order within us, we are in chaos, and the "nations" within us (our disparate parts, each competing with each other for attention and dominance) must be enlightened by the light we receive from these energetic realities in order to function at their highest intended capacity, for which they were created.

It's important to understand that the Jewish People are intended to be a "Light unto the Nations" and that this light consists of demonstrating to the rest of humankind that there is a real, vital and living connection and conduit between God and humankind, and that connection can be reflected in the order of human society as laid out in the Torah.

It's equally important to note that the vital, living idea of being a "Light unto the Nations" can never be divorced from ethics, and that the Jewish People, more than any other population on earth, have a particular responsibility not to allow their light to be extinguished by disconnection and disassociation from the entire underlying structure of ethics and moral responsibility. That is to say, on the purely material and political level, the Jewish People are never to act as though doctrine and dogma are more important than the souls and lives of other human beings, or that human beings may be sacrificed on the altar of doctrine and dogma. This is a terrible misunderstanding (all too common) of Torah.

Thus the Rashi on Genesis 1 is not to be taken as an imperative for political and military dominance of others, but instructions on humility, to understand that receiving the heritage of Eretz Yisrael is to be awarded stewardship, not ownership. God makes it very clear Who "owns" the Land of Israel. In the metaphorical sense, God makes it very clear Who "owns" the body, mind and soul. One cannot say: this belongs to me by right. One can only say: this is in my care because I am to cultivate it as a conduit of connectivity to the Divine and all Creation.

On the ideal level, this is a world of various independent, distinct and unique societies (known as the "Nations") which are transformed by being TAUGHT and instructed by the Jewish example, into nations which live together in harmony, without violence or strife, because they have a living, vital, dynamic, perfectly just, perfectly righteous and perfectly FUNCTIONAL example of how the meaningful, fulfilled life can and should be lived in community and society.

These ideas are true on both an internal and external level. "Astrolojew" astrology as I practice and teach it is concerned with the INNER ORDER and the INNER MANIFESTATION of that order which comes from understanding and incorporating the symbols, archetypes and indeed energetic realities which are the "Mazalot" (the Zodiac).

To take Rashi on Genesis 1 as a starting point, the entire reason for Genesis 1 - Exodus 11 within our own soul is to prove to "the nations" within our own psyche who question and challenge God's existence, sovereignty and benevolence that our lives are not exclusively our own, but belong to God, and in fact, the life force that exists within us is made of the same God-stuff that the sovereign, transcendent God consists of.

In the same way that human lives must never be less valued than doctrine and dogma, within our own psyche, we often find that which is our "human life", our weaknesses, our frailties, our challenges, our undeveloped, underdeveloped or even distorted parts - must never be valued less than the doctrine and dogma with which we govern our inner life. Structure is meant to bring order, and order is the environment where harmony may flourish. Just as this is true on an external level, it is true on an internal level. "Astrolojew Astrology" invites you to enter an already functional, already existent world view of structure, order and harmony specifically designed to best develop your soul. Your soul was MADE to flourish within the cycle of sacred time when it began to live in your body!

If indeed "deep calls unto deep" and "iron sharpeneth iron", only that which is already God within our own soul - the imminent God - can yearn for and respond to the transcendent God. It is that yearning which drives the soul to seek God, and it is that response to what happens when we discover that which we have yearned for IS ALSO YEARNING FOR US, which makes us "Bnai Yisrael", Children of Israel. For it was Jacob, our forefather, who WRESTLED with God and prevailed, winning a new name - ISRAEL. To be "Israel" one must wrestle with God - one must wrestle with every false conception and every distraction, every detour and every cul-de-sac, one must wrestle with one's YEARNING in order to learn how to connect, and how to indeed be a conduit, of the Divine.

Using the Hebrew Calendar and the cycle of sacred time which is the Jewish Year as a devotional tool helps to bring this cycle into the forefront of our everyday living and our consciousness. It is a Divinely structured prescription for spiritual practice intended to align the body, mind and soul to the cycles of sacred time and the rhythms of creation itself. When a soul yearns, that yearning invites a response. Right usage of Sacred Time can help channel that yearning and create a vessel for that response.