Saturn in Aquarius and Celestial Notes for This Week 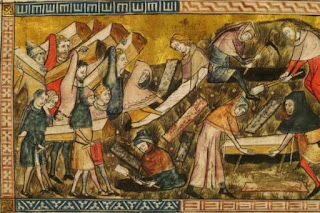 This week: At 15 minutes before midnight Eastern Time on Sunday March 22, Saturn entered Aquarius, and will spend the majority of the rest of 2020 playing zig zag, running between the final degrees of Capricorn and the first degrees of Aquarius, before settling in for the long haul of about the next 2 ½ years of Saturn in Aquarius, beginning in December 2020.

This is the first time Saturn has been in Aquarius since the last time, the last time being February 1991 through the beginning of 1994, more or less, considering the retrogrades at both the beginning and the end of that period. But this Saturn in Aquarius differs in that it contains the conjunction of Saturn to Jupiter, the Great Conjunction, in the sign of Aquarius for the first time since 1405. This happens in December of this year, and the entire year is a lead-up to this celestial portent which signals the paradigm shift, change of world leaders, systems, and the end of the old cycle, beginning of the new. We’re in labor folks, and we’re dilated to 10 and we’re pushing! We’re pushing!

Also Sunday Mercury, back in Pisces but finally going in the right direction, that is to say moving forward, makes a sextile to Uranus in Taurus, which is going to make vague information (that’s Mercury in Pisces) more embodied (that’s Taurus) and solid, maybe in a surprising way or from someone “different” or unique, or perhaps it’s the information itself which comes as a surprise. Venus in Gemini sextiles Neptune and with the Moon in Pisces conjunct Neptune, I’d worry about too much data overload confusing everything, and the inability of those at the highest levels to see the forest for the trees.

Monday March 23rd, Mars in Capricorn conjuncts Pluto. Friends I’m going to try to spin this as positively as I can, but I just can’t sugar coat it, much as I’d like to! Mars in Capricorn is big business, Pluto in Capricorn is big power and big money. The conjunction of these two may trigger outrage and then maybe some outright rage later in the evening when the Moon leaves passive, too easily victimized by external circumstances Pisces and goes roaring into Mars-ruled Aries.

The astronomical New Moon in Aries Tuesday morning makes a conjunction to the asteroid Chiron, the Wounded Healer. You know what I’d love to hear when that happens? “Hello, we’ve discovered a cure for the Corona Virus!” I hope and pray that’s the call. However because of the Mars/Pluto machinations of the previous day, what I’m the most worried about is Wednesday’s conjunction of the Sun in Aries to Chiron in Aries. With the Cardinal Fire sign of Aries, which remember is the Tribe of Yehuda so just think Yehuda energy but basically unrectified because this is the world we’re living in – The Sun illuminates the pain of this whole world, which is Chiron in Aries. Chiron is “the wounded healer,” this asteriod’s legend and archetype is this: a centaur who lived on Mt. Olympus as tutor to the children of the gods, Chiron was wise, kind, and beneficent to all – maybe a little bit too much so, for because he took pity on the human race and taught them the secret of fire, Zeus, the king of the gods, punished his centaur / tutor by giving him a wound which would never heal. The only relief Chiron could get for his wound was to heal others who were also wounded. So we have Chiron in Aries, the sign of blood, the sign of fire, the sign ruled by Mars, conjunct the Sun. I’d like to hope this means the healing ultraviolet rays of the Sun illuminate the consciousness of all of mankind and remove the primal woundedness from each person through self-awareness. OR it could be a violent (that’s Aries) manifestation of woundedness (people rioting via Zoom?) because the government is dragging their feet around sending relief and dealing with this thing?

Rosh Chodesh Nissan comes on Thursday and the Moon enters Venus-ruled Taurus. Now things start to get real. We’ve moved out of Solar Pisces and even now out of Chodesh Adar into Chodesh Nissan – the month G*d willing of REDEMPTION, for the Jewish People and the Human Race, may it be so!

The Moon in earthy Taurus squares practical Saturn in Capricorn on Thursday, prompting investment into solid and concrete value – stocking up on canned goods? Toilet paper? Buying stock in Weight Watchers because you know from all this stress-eating their stock is going to go sky high in the summer? The Moon in Taurus also makes a conjunction to Neptune Thursday evening, and a sextile to Pluto Friday morning. The rich get richer and the poor get angry. Revelations of powerful elites receiving favorable treatments and financial outcomes may stress the general public to the breaking point. That’s on a national level. On a personal level: Emotions are going to ping-pong all over the place, from hopelessness to empowerment, from fear to desperation to climbing the ladder of faith all over again. That’s a description of the New Normal but it’s also Thursday and Friday by the stars.

Saturday which is the 3rd of Nissan is Shabbat Parshat Vayikra, Venus in her home sign of Taurus trines Jupiter in Capricorn, and later trines Pluto in Capricorn as well. If you listen to Venus in Taurus what she’s saying is this: take a bath. Eat some chocolate. Make love. Jupiter and Pluto are only too happy to oblige, empower, and facilitate her requests. I suggest you cooperate as well. We are all going to need the most de-stressing of activities to counteract all the stresses going on all around us as the days turn into weeks of social isolation.
at March 26, 2020