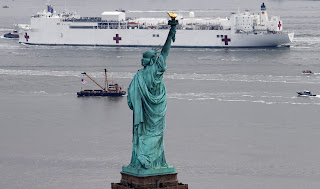 Friends, I will cut right to the chase here. There are two huge things happening in the stars this coming week. One is the conjunction of Mars and Saturn in Aquarius on Tuesday March 31, and the other is the first of the three Jupiter-Pluto conjunctions of 2020, which happens on Saturday April 4, Shabbos Parshat Tzav.

Medieval astrologers understood the conjunction of Mars and Saturn in Aquarius as being the signature celestial pattern reflecting the presence of plague.

My interpretation of these two events is that the coming week will see severe spikes in infection news and the result will be a big government crackdown on personal movements - even more strict than measures currently in place.

I am hoping that by Chodesh Iyar ("Ani HaShem Rofecha") we will see a lot of healing. The Jewish Calendar would indicate that the plague to turn around by Lag b'Omer (May 12) with significant relief by Shavuot (May 30) but ONLY IF YOU STAY THE F*&K HOME. If you don't stay home, we'll all be quarantined until Tisha b'Av.

Regarding the Mars-Saturn conjunction, which is relatively rare: The last time Mars and Saturn were conjunct in Aquarius was March 1992, during which the "Michelangelo computer virus" ravaged DOS-based computer systems world-wide.

The time before that was February 1964, during which the USA was in the throes of Beatlemania, an extremely contagious phenomenon. This was also the peak of the Rubella epidemic. Rubella, also called at that time “German Measles”, infected 12 million people and 20,000 babies were born with severe complications from the disease.

The time before that was January 1934, during Hitler was elected Chancellor of the Reichstag and when Nazi Germany passes the "Law for the Prevention of Genetically Diseased Offspring". I don't think I need to elaborate on the contagious nature of vile antisemitic hatred - that's obvious to all.

So: Sunday March 29 and Monday March 30 the Moon is in Gemini, with the Sun in Aries, you can bet on a lot of aggressively delivered information, data dumps, and Mars enters Aquarius on Monday as well, leading up to his conjunction with Saturn on Tuesday.

The point where Mars and Saturn meet in Aquarius meet on Tuesday is 0 degrees Aquarius – the exact point of the upcoming “Great Conjunction” of Jupiter and Saturn in December 2020, the one I’ve been talking about here on this podcast, on my FB page and my blog, etc. for months and months. Events taking place around the Mars / Saturn conjunction this week will be revisited, dare I say with a vengeance, at the Jupiter-Saturn conjunction at the same cosmic address in December.

The Moon moves into Cancer Tuesday morning the 31st as well, preparing for her First Quarter Moon Wednesday. That’s what you call “reva l’Pesach” – 15 minutes before Passover – on the cosmic clock or the Cycle of Sacred Time known as the Jewish Calendar. Moon in Cancer is food, home, mother, money. These security triggers will be HUGE this week, especially on Thursday as the Moon in Cancer opposes Jupiter and Pluto in Capricorn, and later in the day when the Moon moves into Leo, opposes Saturn and Mars in Aquarius. The inherit emotional volatility of this week will be a wild ride as every possible trigger will be activated.

Friday with Moon in Leo adding a dramatic dimension to just about everything – and melodramatic in many cases – sees Venus move out of her Earth-home sign of Taurus and into Gemini, followed by Mercury’s conjunction to Neptune in Pisces. Widely varied interpretations of data and the level of distortion around the flow of information both skyrockets.

Saturday April 4 is Shabbat haGadol, the Great Shabbat before Pesach. Venus in Gemini trines Saturn in Aquarius which might supercharge creative ways of overcoming loneliness during this time of self-isolation. Connection to each other will be the prime directive as later on Saturday Jupiter makes the first of his three conjunctions of 2020 to Pluto at 24 degrees Capricorn. Remember Jupiter supersizes and giganticises everything he touches, and Pluto is raw power, raw ambition, raw need to seize what is desired: control, and wealth. They don’t call it a “Plutocracy” for nothing – governments controlled by the wealthy. I think we will see a power grab move by controlling powers which may in the short term, or medium term, be seen as a drastic measure to flatten the curve or stop the spread of the corona virus, but in the longer term these measures will be fought against and opposed by some.

Jupiter will make his second conjunction to Pluto June 30, at the same degree of Capricorn, but Retrograde. This week during the first Jupiter-Pluto conjunction, Mars will be in Aquarius, the futuristic sign of progress and science, at same zodiacal point of the upcoming Jupiter-Saturn conjunction in December, signaling a change in leadership or the rise or fall of a society or government. At that second conjunction in June, the retrograde one, Mars will have just entered Aries, the sign of war. It’s possible civil liberties and personal privacies superseded by emergency conditions in April will, by June, be revised with aggressive resistance.

The final conjunction of Jupiter and Pluto on November 12 occurs when Mars is in Retrograde Aries. That conjunction, exactly on the Saturn-Pluto trigger point of January 12 which started this whole thing off (seems like a million years ago, doesn’t it?) brings the progression of these three conjunctions to a climax. But OMG, it is impossible to know what life will be like in mid-November. Will America even have an election? Will there be some big power grab by the government? Will Mars in aggressive Aries square Jupiter-Pluto reflect G*d forbid people taking the law into their own hands? A massive march on Washington? Nobody knows, and I’m not guess-estimating.

So keep a lookout for key events this week; they’ll be revisited over and over again this year as we try hard to find a place to rest our foot during this freefall, during which the old normal is dead and the new normal hasn’t really begun.

Saturday April 4th is Shabbos HaGadol is also Parshat Tzav, which includes the details of the "Thanksgiving Offering" brought by someone who survives great danger, as well as the warning to Aharon the High Priest & his sons the priests not to leave the confines of the Tabernacle for the entire 7-day inaugural process. We are supposed to be a "nation of priests" and this week we need to understand that we must not leave the confines of our homes. We may also take this time to contemplate what kind of "offering" we are moved to give to this world if we are blessed, please G*d, to survive this (and may we all be!). We give to G*d by giving to each other. What might be your gift? Something to think about here.
at March 31, 2020